Thank You For Your Love

In 2023, a living legend of musical theatre turns 95: Lyricist-bookwriter Tom Jones (who also, under a stage name) appeared in the original company of his most famous and wildly successful record-breaking musical, The Fantasticks.  His collaborator, composer Harvey Schmidt, just recently passed away. The production's record-breaking run closed, on January 13, 2017, after 23,712 performances (57 years).  Their shows also include 110 in the Shade, I Do! I Do!, Philemon, Celebration and many more.  And celebration is what it's about when Broadway veterans Carole Demas, who originated the role of Sandy in Grease, and Sarah Rice, who originated the role of Johanna in Sweeney Todd, return to celebrate Jones & Schmidt.  Demas and Rice have based the show on their 50 years of work and personal relationships with Tom and Harvey.  And Featuring Broadway’s Hal Robinson who is also a Fantasticks alumni.

The show, titled THANK YOU FOR YOUR LOVE, which just won a coveted BISTRO AWARD,

is availble as a 90 minute - 1 act presentation, or a full evening 2 act show, running a little over 2 hours plus intermission.

"Fills us with pleasure” – Theater Life

"This mélange of life-affirming songs that glow in the talents and heartfelt performances of these two women is like being refreshed and having faith renewed. You really do "try to remember the kind of September when life was slow and oh so mellow." … Life is good, life is rich, and life is real and love is all those things, too, in the songs of Schmidt and Jones especially when these two women sing them with such passion and belief and commitment."   Rob Lester

"THANK YOU FOR YOUR LOVE: OUR CELEBRATION OF Jones & Schmidt won the BISTRO AWARD for Outstanding Tribute Show. Starring Carole Demas and Sarah Rice (both of whom played Luisa in the original production of THE FANTASTICKS), featuring Hal Robinson (who played El Gallo in the original Production). Directed by Charles Repole, and illuminating projections by producer Stuart J. Allyn, it is rich with marvelous singing, trenchant song interpretations, and a great deal of heart."

Demas and Rice each played Luisa in the long-running original production of THE FANTASTICKS. From a personal perspective, they will share their love and appreciation of years of professional work and ongoing friendships with Jones and Schmidt. This unique offering of songs, multimedia, and funny and poignant backstage/onstage stories will feature beloved favorites such as MY CUP RUNNETH OVER, TRY TO REMEMBER, SOON IT'S GONNA RAIN, and other exquisite gems and novelty numbers sung by two of Broadway’s most captivating voices.

Thank You For Your Love is

with musical direction and vocals by Warren Helms,

The Show is produced by A.D.R. STUDIOS, Inc. 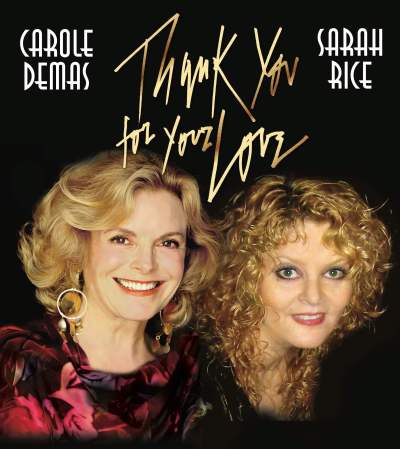